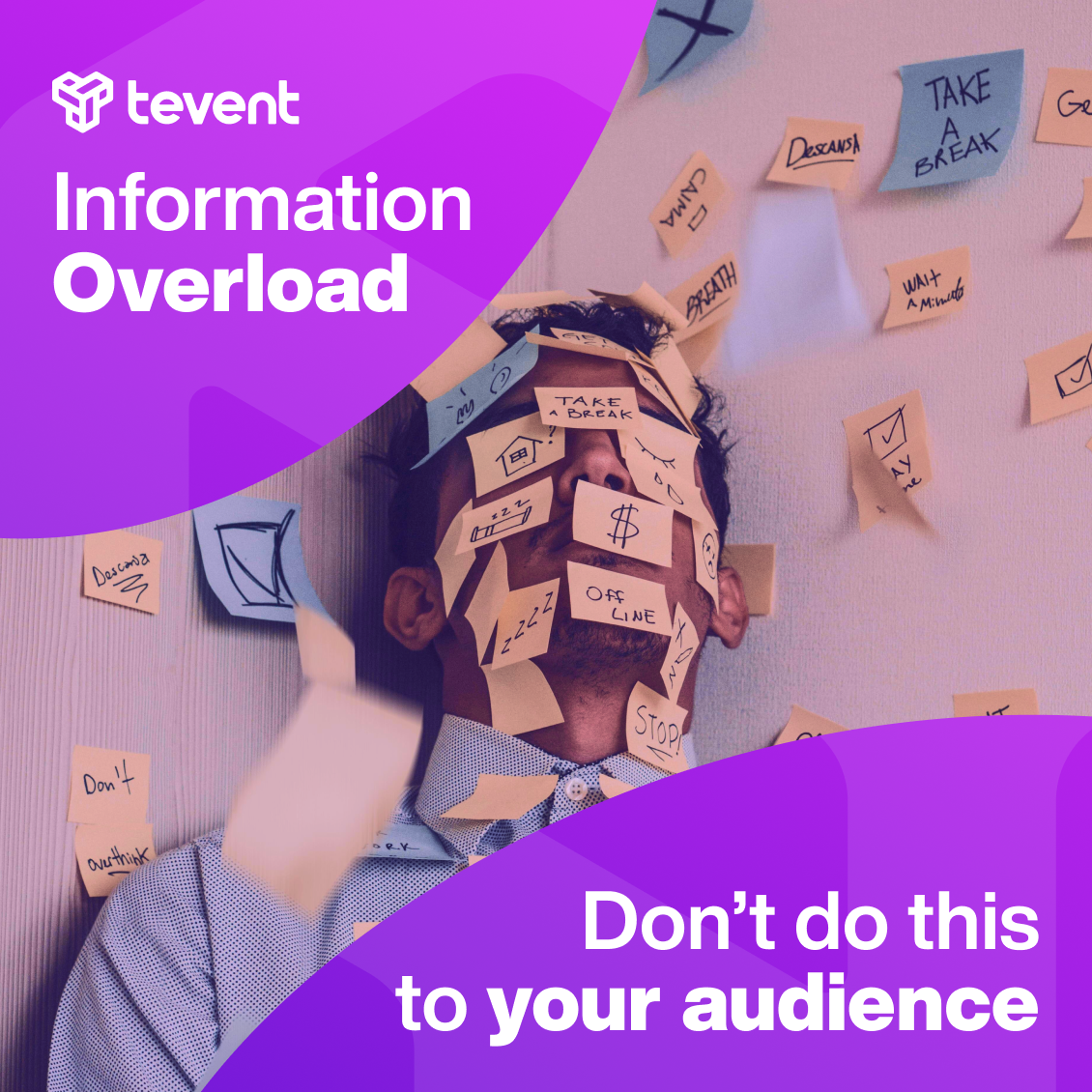 Meeting and sharing is being interrupted, now more than ever, by the incessant consumption of information. Paying due consideration to how much of that information we can actually meaningfully process is key to more productive engagement - so, whether you're hosting, presenting, organising, or attending events, it's worth remembering that less is often more.

Living In an Age of Information Overload

From firing off countless emails a day, to endless push notifications and all-you-can-eat data plans - we are, as psychologist Daniel Levitin tells us, very much in an age of 'information overload'. For starters, our phones have become the Swiss-army knives of the twenty-first century; they're our cameras, our torches, our alarm clocks, calculators, maps, dictionaries, calendars, train tickets, plane tickets, notebooks, personal assistants and secret confidants. Oh, and you can use them for calls and texts too. Modern living has increasingly, both overtly and more subtly, made it seem viable to cram action, and information, into the same slither of precious time.

We text whilst crossing the street; we check on what our friends are doing whilst out with our (other) friends; we listen to podcasts whilst we work, and do our taxes mid-Pilates whilst also barking shopping list orders at our Google Nests. This illusion - one increasingly forwarded as the modus operandi of any and all enterprising individuals - maintains that having your fingers in as many pies as you can find is good for business.

We on the other hand, are not so sure. Although it feels like we're getting lots done, when we are manically spinning various, disparate plates, we are in fact demonstrably less efficient, and operating at a 'much lower cognitive level' too. It has even been shown that bouncing around between different tasks, and/or focal points, leads to an IQ drop comparable to someone who has missed a night of sleep. Interestingly, related research conducted at Stanford University found that 'heavy multitaskers' (those who claimed they multitasked often and felt it boosted their performance) were actually worse at multitasking than those who preferred to do a single thing at a time.

Being regularly assaulted with several streams of information makes it much less likely for any of the various threads to be properly absorbed, nevermind subsequently engaged with. Indeed, 73% of average meeting goers reported doing 'other' work whilst present, though (a whopping) 91% of the same respondents also admitted to daydreaming at some point during the proceedings. Of course, it's very normal for the human mind to wander, but overbearing slides, meetings of 50 people and jam-packed itineraries are more conducive to total disengagement than they are to fruitful work - especially when we think about how 'switched on' we are otherwise. To again borrow from Levitin:

"the human mind is designed to process three or four things at the same time and if you get much beyond that, you begin to exercise poorer judgement, you lose track of things and lose your focus".

Crucially, this is an age-old problem, linked to the fundamental fallibility of memory. To put it crudely, when the first humans were carving pictures and symbols into cave walls (and later papyrus, parchment and eventually paper) they were finding ways to extend the limits of their mental capacities by storing information externally - the more they preserved, the 'freer' their own memories would be for new information.

The way human systems metamorphosise are rarely the linear processes we may assume them to be however - and it's important to distinguish between tendencies that enhance the natural organisation of our brains, and those that totally overhaul said organisation to the detriment of ourselves, and those around us. In practical terms, this means - instead of assuming the impressiveness of modern day technology will do all of the hard work for us- factoring in proactive activities that 'do' something with new information to help it stick. Think polls, quizzes or even brief discussions, as well as making sure that follow-up links and resources are integrated into workflows and presentations, to facilitate both further reading and the longer-term digestion of subject matter. A necessary precondition as far as genuine understanding (rather than mindless regurgitation) is concerned.

Sustained attention may be falling out of vogue in light of our constantly-on-the-go-and-doing-lots-of-stuff lifestyles, but it reaps huge rewards to resist, if only in part, the novelty bias of the prefrontal cortex, that prompts our focus to be hijacked by some 'new' piece of information. Very little gets done if we spend all our time dipping our toes into different 'bits' - only to be whisked away by something else before we can even get to the end of a page.

There is strong impetus to make sure our approach to collective sharing doesn't perpetuate the vicious cycle that favours breadth over depth, when things should really be the other way around. This premise has only become more pertinent as more of us are remote from our colleagues and prospective audiences, and as a result still adjusting to the demands of being physically removed from those we are trying to inform.

In an office for example, it would presumably sour relations to dump two-hundred sheets of paper onto somebody's desk and expect them to draw something valuable from each, but in the virtual space the relative dissonance - and the desire to prove our productivity outside the confines of the company headquarters - can make it tempting to 'dump' information, and encourage unfeasible levels of task juggling. Moving forward, as virtual events continue to democratise access to opportunities, the importance of planning with meaningful engagement in mind is difficult to overstate.

It's always nice to have actionable steps, so, for quick reference, we've compiled some easy tips here to help you practise what you (we) preach:

2. Do follow-up with links and further reading;

4. Give people the chance to 'do' something proactive with new information.

Host your events for free, while we’re in Beta.